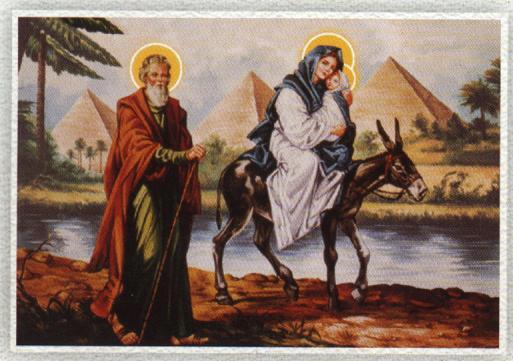 On this day, our Lord Jesus Christ came to the land of Egypt when He was a two years old child, as the Bible says in (Mt. 2:13) that the angel of the Lord appeared to Joseph in a dream, saying: “Arise, take the young Child and His mother, flee to Egypt, and stay there until I bring you word; for Herod will seek the young Child to destroy Him.” This was for two reasons: A. If He fell in the hand of Herod, and Herod could not kill Him, he would have thought that His flesh was a phantom.

The Lord Jesus came to Egypt with Joseph, and His Virgin mother, and Salome. They passed in an estate called “Basta” where the Holy Family drank from a well, and the water of the well became a curing water for all sicknesses. Then they went to “Meniet Samannoud” and crossed the Nile to the western side. In this place, the Lord Jesus put His foot on a stone, and the trace of His foot appeared, and the stone was called “Picha Isos” in Coptic (or The heal of Jesus). From there, they went westward to Wadi El-Natroun, and St. Mary blessed the place, for her knowledge that many monasteries would be built there. Then they went to “Al-Ashmoneen” where they settled for several days, after which they went to Mount “Qosqam”, where the monastery of St. Mary was later built, which has been known with the name “El-Moharrak monastery”.

When Herod died, the angel of the Lord appeared to Joseph in a dream saying: “Arise, take the young Child and His mother, and go to the land of Israel, for those who sought the young Child’s life are dead.” (Mt. 2:20-21). They came back to Cairo, and on their return they stayed in a cave which is today located in the church of Abu-Serga in Old Cairo. Then they passed by El-Mataryia, and they washed there from a well, and the well has been blessed since, and a tree of Balsam grew beside it, from its oil the Chrism (El-Myroun) is made which is used to consecrate new churches. From there, the Holy Family walked to El-Mahama (Mustorod), and from there to Israel.

We ought to celebrate this feast spiritually with joy, for Our Lord Jesus honored our land.

Glory to His Holy Name for ever. Amen.