13905 108 Avenue, Surrey, British Columbia, V3T 2L1, Canada On July 19, 2021, the congregation of St. George Coptic Orthodox Church in Surrey, B.C., woke up to news that their church had been burned to the ground. Flames broke out shortly before 3:30 AM and by the time firefights arrived, the building was engulfed in flames that were visible for miles. This nearly 70-year-old building was much more than just a building; Bishop Mina said in a statement, “… it was a place [where] we built community, where we shared meals, where we married our youth, baptized our babies and welcomed newcomers to the faith…” Our Church brought together a diverse congregation of Coptic, Eritrean, Ethiopian, Iraqi and Lebanese Orthodox believers. While we are thankful to all those who have reached out and offered their churches as a temporary location where our services can continue to be held, we hold strong in the belief that our Lord Jesus Christ will “restore its ruins and will rebuild it as it used to be.” (Amos 9:11). We rely on your generosity to be able to once again build a church that will be a beacon of light to all those around it and serve the needs of its congregation and the surrounding community. Update on August 30, 2021 4:00 PM: Surrey RCMP issued a press release regarding their investigation into the fire that destroyed our church. On Thursday August 26, 2021 they arrested a 35-year old woman and charged her with two counts of arson in connection with the incidents on July 14, and July 19, 2021. Four ways to donate 1. Credit Card through PayPal 2. Credit Card through GoFundMe 3. E-transfer Canadians can donate by E-transfer to donation@stgeorge.ca 4. Wire Transfer To do a wire transfer from the USA or […] 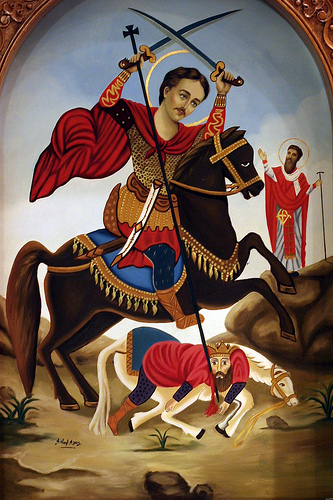 Hator 25, 1739 December 4, 2022 On this day, St. Mercurius, known as the saint with the two swords (Abu-Saifain), was martyred. He was born in the city of Rome. His parents were Christians and they called him Philopateer (which means “Lover of the Father”). They reared him in a Christian manner. When he grew, he enlisted in the army during the days of Emperor Decius, the pagan. The Lord gave Philopateer the strength and the courage, for which he earned the satisfaction of his superiors. They called him Mercurius and he grew very close to the Emperor. When the berbers rose up against Rome, Decius went out to fight them, but when he saw how many they were, he became terrified. St. Mercurius assured him saying, “Do not be afraid, because God will destroy our enemies and will bring us victory.” When he left the Emperor, an angel appeared to him in the shape of a human being, dressed in white apparel. The angel gave him a sword saying, “When you overcome your enemies, remember the Lord your God.” (That is why he is called, “of the two swords”, “Abu-Saifain”, one is the military sword and the other is the sword of the divine power). When Emperor Decius conquered his enemies and Mercurius came back victorious, the angel appeared to him and reminded him of what he told him previously, that is, to remember the Lord his God. Decius, and his soldiers with him, wanted to offer up incense to his idols and St. Mercurius tarried behind. When they informed the Emperor of what had happened, he called St. Mercurius and expressed his amazement at his abandoning of his loyalty to him. The Emperor reprimanded him for refusing to come and offer incense to the idols. The Saint cast […]