13905 108 Avenue, Surrey, BC V3T 2L1 International & Canadian donors can pay by credit card through PayPal. Canadians can donate by e-transfer to donation@stgeorge.ca. Subscribe to our YouTube channel. Support us on Facebook. Media coverage about church destruction 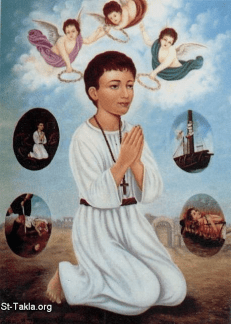 July 31, 2021 Abib 24, 1737 On this day, St. Apanoub (Abba Nob) was martyred. He was born in the city of Nehisa (District of Talkha). His parents were pure and merciful and they reared him in the fear of God. When Diocletian incited the persecution against the Christian, St. Apanoub was twelve years old, and he desired to shed his blood for the Name of Christ. One day he went to the church, and he heard the priest teaching the believers, strengthening them in the Faith, warning them from worshipping the idols, and encouraging them to deliver themselves over to death for the sake of the Lord Christ. He returned to his house, and set before him all what his father had left him of gold, silver, and apparels and told himself it is written, “The world is passing away, and the lust of it.” (I John 2:17) Straightway he rose up, and gave all his money to the poor and needy, then went to Samanoud, walking along the river bank. He confessed the Name of the Lord Christ before Lucianus the governor, who tortured him severely. Then he hung him up upon the mast of his ship head downwards. The governor sat down to eat and to drink, and the vessel which was in his hand became a stone. The angel of the Lord came down from heaven, released the saint, and wiped up the blood that was running down from his nose and mouth. The governor and his soldiers were greatly disturbed. Strong winds blew, that made the ship to sail fast to Athribis. When they arrived, the soldiers unfastened their belts, and cast them before the governor, then confessed the Lord Christ and they received the crown of martyrdom The governor of Athribis tortured St. Apanoub […]